Here, she has produced a list of ready-made retorts for anyone who encounters a multi-level marketing recruitment attempt in the wild. You can adjust and adapt the answers depending on your country of residence, and the MLM in question. Some are lighthearted, some are more brutally honest – I am sure there will be something for everyone.

Before reading Foxy’s article, please remind yourself that all views presented in this blog are as told to us by the authors, and simply reflect their own opinions. Your own personal experiences with MLM companies and products may differ, negatively or positively.

I’ll now hand you over to Foxy.

[Foxy:] Thanks to Elle for inviting me to write a guest post.

Like most people, I’ve seen a few good friends turn from fun women with individual characters who pride themselves at not following the crowd into Younique ‘hunbots’ overnight, right before my eyes on Facebook:

I’ve resisted unfollowing friends while they went through this phase, and luckily the makeup hard sell has eventually phased out.

Being someone who’s very committed to buying cruelty-free products, I’ve also had my fair share of exchanges with MLM presenters (that I don’t know personally) who post on Facebook groups where someone asks for a lipstick recommendation, for example, and they jump at the chance to tell them about the new range “we” have at X or Y brand, and offer to “help you find your perfect shade” followed by the inevitable claim that their products are “not tested on animals.” My links to articles on their brand by reputable cruelty-free organisations showing their claims are false, invariably ignored as they claim some conspiracy by the Chinese government to “test their products without their company’s consent“.

Last year I came across Elle’s #Poonique tale and found a kindred spirit in her wish to call out the too-good-to-be-true claims of MLM presenters, their shady business practices and superficial over-friendly language.

So fast forward to yesterday, when I received a direct message on Instagram. I’m new to Instagram, being a bit of a technology dinosaur, and though I’ve quickly picked up the art of posting beautifully staged photos of what I’m eating or wearing, I hadn’t yet noticed the private message option.

I didn’t initially spot this correspondence from someone who had recently followed me and ‘liked’ and commented on a few of my photos. The message instantly raised a red flag for me, with it’s sickly attempt at flattery and suspiciously vague mention of some sort of opportunity I’d be “amazing” at.

My reply preempted the probable attempt to recruit me to MLM selling, and I politely declined before the invite could be given. 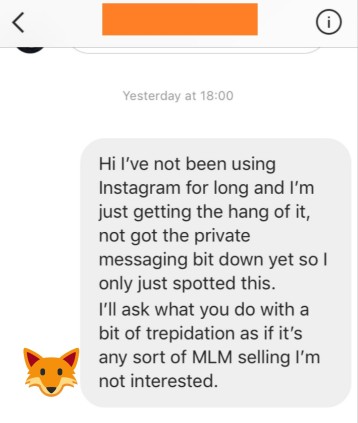 I then went back on the home page on Instagram and saw a post she had made selling Younique, and promptly decided to unfollow her (I’d followed her in response to her following me probably less than 24 hours before.)

After a while I saw she had responded to the private message, so I checked out her reply. Respect given to this woman that she actually didn’t attempt argue with me about Younique being an MLM, and was polite. But here’s the point of my post here; she then asked me if I’d mind explaining why. 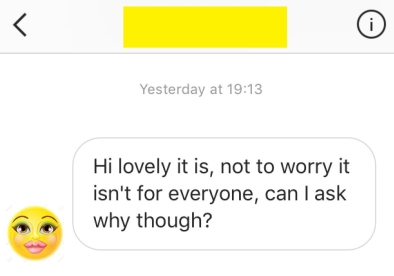 Well that to me was an invitation I couldn’t refuse. 😏 So, as I didn’t want to leave out any of the myriad of reasons for not accepting a request to get involved in an MLM company, I posted on Elle’s Facebook page inviting her followers to help me have a little fun in compiling a list.

…or assumed I mistakenly felt that I needed to justify myself. I didn’t at all. 😆

So with lots of my own points, and help from Elle’s followers, I compiled a list of reasons why I would never become a Younique presenter. Here follows that list.

I had to make a screenshot photo to send the list over Instagram as I discovered it’s not the platform for long messages.

Again I give the women respect that she replied in a polite manner even though she has the obvious blind faith of someone brainwashed by MLM. 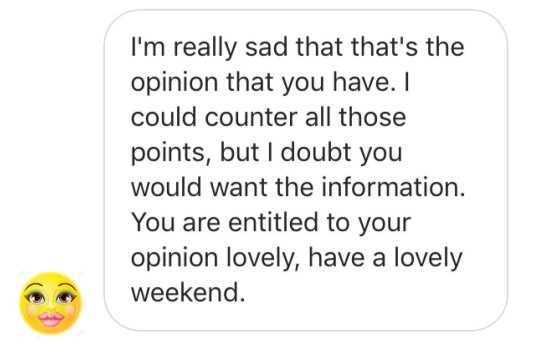 She is quite right that I’m not interested in discussing my missed opportunity further. I did have lots of fun compiling the list and reading others suggestions though (especially the final one 😆) and I will be saving my list for if anyone misjudges me to be a potentially “amazing” recruitment candidate in future.

Feel free to copy my list and use/adapt it yourself should you encounter a MLM recruiter of your own!

[Elle:] Big thanks to Foxy for sharing her template of retorts with us. I hope that this list will help anyone who needs some quickfire answers at the ready. Feel free to add your own suggestions, or any questions for Foxy below.

Do you want to write a guest post of your MLM experience, or would you like to produce anti-MLM articles with the coalition? Be our guest and check out our submission guidelines – we would love to hear from you.

If you have enjoyed my anti-MLM mission thus far, please consider becoming my Patron. Any and all support is very much appreciated.