The Younique Foundation Follow-Up – I Thought Your Rose Gold Kudos Had Sold Out, Huns?

Maz Carrah and I have received a lot of positive feedback in respect of our first collaboration, The Younique Foundation – Charity or Travesty?  We have heard from brave sexual abuse survivors, who were also horrified at the hun-conduct they have witnessed regarding the Younique Foundation.

Maz has mulled over some further information she has on this “charity”, and she is getting angrier.  So much so, she has decided to continue the onslaught with a follow-up article.

The mic is back in your hands, Maz.

[Maz:] Thank you for having me back, Elle.  I am back again to talk further about the Younique Foundation (YF).  So soon?! I hear you cry.  They have barely given us enough time to recover from the last post!

[Elle:] Well, it transpires that our friends at Poonique have hurled more blog-worthy questionable practices our way, for us to naturally look into.

[Maz:] And look into them we shall, as is our duty to the people.  As you will recall from our last post, we spoke about the Foundation, who it helps, where the money comes from and where it goes.  It was always my intention to elaborate with Elle on this investigation – which you will see delves a little deeper into the financial side – however, we have been spurred on by a series of unusual events. 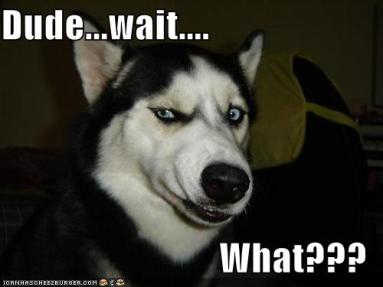 Let’s investigate this by asking the only people who would know, the hunbots themselves.

The two images below were shared in a UK Black Status hun’s training group, when the Kudos was initially announced – these images tell us a little bit about this bundle. 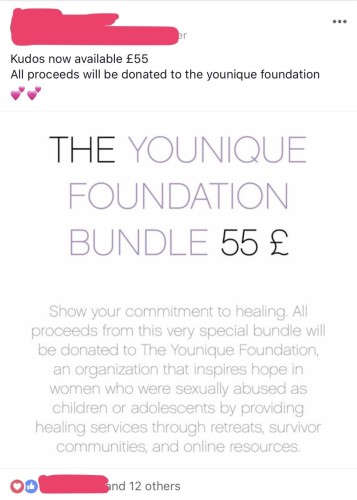 Lets just all take a moment to acknowledge that the first image tells us not once, but twice, that ALL the proceeds will be donated to YF (We will come back to this later).

Here we have our third screenshot – this is from a higher up Black Status presenter from the USA, updating us on the sales of the kudos. 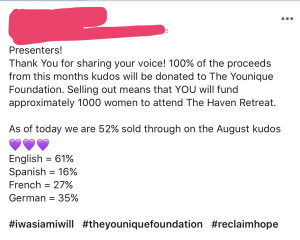 So yet again, this post tells us 100% of the proceeds goes to YF. It also tells us that when it sells out that approximately 1000 women will be funded to attend the Haven Retreat. And it appears that it won’t be too long until this limited edition bundle is gone, because they are 52% sold out worldwide!!!!

Well I guess this next post was inevitable then – well done to those huns – and the UK sold out shortly afterwards.

Frustratingly, we cannot find anywhere exactly how many kudos bundles they had available for purchase (at $69 a piece in each of the 12 countries Younique Products (YP) sells in). So regrettably, we couldn’t find out how much money it was that went to YF to pay for 1000 women to attend.

Just the same line repeated over and over again…

[Elle:] I have absolutely no words.  Its a hun-miracle, surely??

[Maz:] Miracle indeed!  After all, we were under the impression that there was only a finite amount of bundles.  Scarce in availability, they were to be sold with 100% of the proceeds going to YF and subsequently funding 1000 women to attend the Haven Retreat. Right?

[Elle:] Apparently so.  I mean, we saw it in black and white from that ultimate Black Status Hun – the kudos had sold out, and all the huns were giving themselves a big pat on the back for their hard work.  Unless, the huns have managed to learn themselves some magic tricks?  Anyway, I made a meme to express my thoughts…

We searched desperately for answers.

Silence on the hunbot front.

Not only did nobody know the answers to these questions, no-one was even asking them. They were all too blinded by panic to buy more bundles, that none of them appeared to stop and question the inconsistencies.

So someone just tell me, where have these extra bundles appeared from?

Well they soon disappeared, as the YP website now shows the bundle as “SOLD OUT” once more.

We can’t shake the feeling of something not being quite right. Why aren’t they shouting from the rooftops how many bundles they have sold, enabling all these women to attend the retreat?

Back in 2015 when the new formula mascara was released, there was a counter on the website, showing how many had been sold and how close they were to their target of 100,000. They were even giving out these charms to those who signed up during that period…

Why aren’t they using the same techniques now to proudly show off how many bundles they have sold? Why aren’t they desperate for people to know? Surely it is something to be proud of, given that YP was established with the intention of funding YF?

So it would appear it is not possible to work out how much it costs for each of the 1,000 women to attend the retreat from the kudos sales.

Let’s refer back to the YF website and here comes the part where we dig a little deeper and pull it apart.

The YF website appears to be very transparent for the Year 2016 (let us remind you that was not the case for the year 2015, and the lack of audited reports is one of the factors in YF not achieving charitable status in the UK. 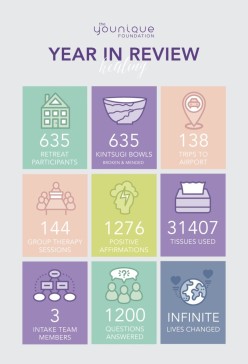 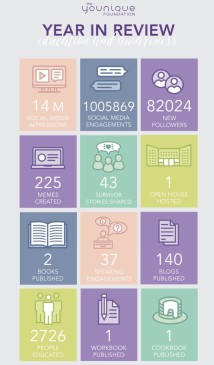 From these info-graphics we can see that there were 635 retreat participants in 2016.
This next image gives a basic breakdown of where their money was spent. 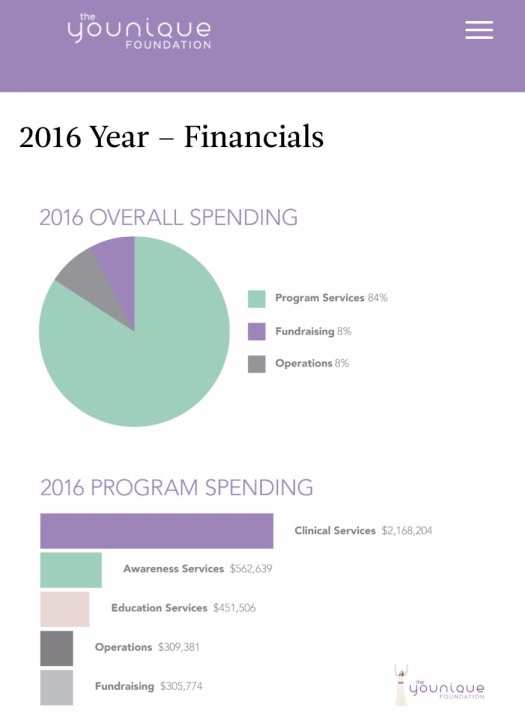 Still with us? Good.

The cost of the kudos is $69, so to raise $3,414,490 they would need to sell 49,485 bundles.
We are confused why that cannot be publicised?
Just to be difficult, Elle, I am going to play devils advocate. Because you know, this issue isn’t confusing enough as it is.

[Maz:] Lets refer back to this image, shown on the YP website advising the kudos is sold out…

…Thanks to you, we’re able to send 1,000 women to The Haven Retreat at NO COST TO THEM…

Now this is a rather ambiguous statement. Does this mean the retreat will be free of charge but they will have to find their own way there?

Hmmmm… Not really “at no cost to them” then, is it? Rather misleading as that is what the YF already offers everyone anyway.
OR, does this mean that it really as at NO cost to them, and their transport will be being paid? For all 1,000 women? No matter where they are in the world, they will be offered this opportunity with nothing to pay?

If that is the case, then fantastic, BUT how do they know what the cost of the transport would be? As we have already worked out, it would cost approximately £1499 ($1934) for return flights from London (UK) to Utah.

Realistically, YP have no way of knowing what the transport costs of 1,000 women would be, so how can they know how much stock they will need? The most likely scenario is that the proceeds from the bundle will be paying for the retreat alone, not transport. But that is by no means clear in how it is being advertised to presenters, and customers.
And then there is the whole issue of its now sold out, then in the next breath, oh wait, no its not!

Well this one we can both clear up for you easily really through personal experience, and this will also give you food for thought about them selling enough so-called “limited edition” bundles to fund the retreat.

When a kudos is released, it is always “limited edition”.  You can also bet your bottom dollar when the next catalogue is released the shade everyone was fighting over because it will be “gone” will be the brand new shade.

It is just yet another snidey tactic used to drum up sales – tell people there is only a limited supply and if they don’t get it NOW they won’t get it at all.

[Elle:] I think this is the perfect point in the article to share this meme I made, especially for this occasion. 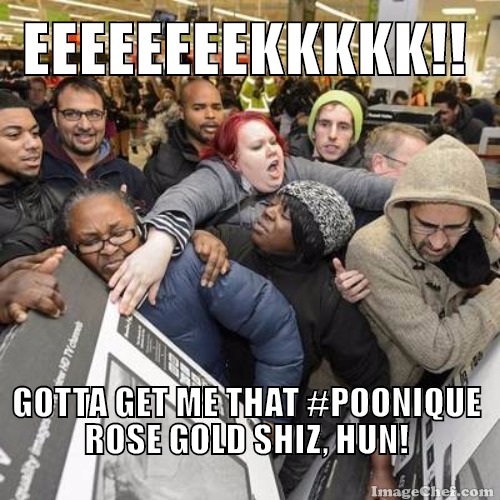 [Maz:] Very fitting, Elle!  The huns needn’t worry – YP will have a warehouse full of these “limited edition” rose gold colours, and will continue to have them made in September when this kudos run ends. Let’s face it, they would be fools not to, given that rose gold is so popular at the moment.

If you are still with us, you may have noticed that the calculations we did earlier (to work out the number of units needing to be sold to fund the retreat) used the full $69 from the cost of the bundle, just like YP promised it would.

Just as we promised waaaaay back at the start of this article, we are coming back to that.

So our question to you, is who pays for the presenters’ commission? Because they will still be earning it. As will their upline. And their upline’s upline. Are YP paying for this commission out of their own pockets?

Or is the reality of it; whatever paltry sum is left after commissions and overheads are deducted will be actually be the figure donated? Not 100% of the proceeds, but just whatever is left?

Again, we would love to confirm this… But we are unable to find any information past what we have shared with you already.  Get in touch with me if you can elaborate.

I’m off to do more digging.

[Elle:] Well, this one is all 100% on Maz – she’s worked extremely hard on putting this together, and I would once again like to thank her for the time and effort in getting the word out.  Maz is also going to be writing solo articles on her own blog (she’ll still do collaborations with yours truly), and you can also follow her on Twitter and Facebook.

As for me, if you like what I do and wish to support my anti-MLM mission (and turn my #Poonique story into a detailed novella), please consider becoming my Patreon.

I’ve also updated my recommended reading page, check it out!